Why I married her

Don't know what your signif other asked for his/her last birthday, but mine requested a couple of traditional items - a home cooked meal and a simple mode of transportation.

Not so unique you say?

Pulling together all the fixin's for a traditional Japanese fire-pot meal is one thing when you have well stocked stores of food stuffs from the Orient a mere SoCal freeway interchange away.

Not so easy out here on the wilds of prairieland Oklahoma.

Still and all, with some careful planning, internet mail ordering, improvisational food preparation methods and a hint to the local butcher on the easiest method for cutting ribeye steaks into paper thin slices (slightly freeze the meat first), my wife had the meal she had been craving for since moving back to Oklahoma.

One down, one to go. Next up, a traditional and simple mode of transportation... 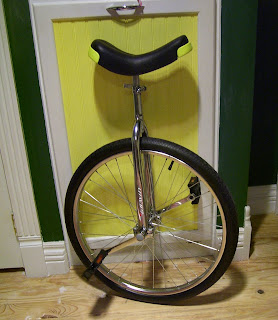 The inevitable question being, "What is your wife a clown or something?"

To which I reply, "What, your wife didn't walk on 8-foot homemade stilts, do handstands on a basketball, or ride a unicycle as a kid?"

She has yet to get the uni-legs of her youth back under her, but she's determined to get back on her single wheeled horse by the end of the holiday period, if not sooner.

And yes, I checked to make sure our health insurance card is safely tucked in my wallet.

It was a small blurb in our local small town news rag, barely 4 column inches long and relegated to the very bottom left hand corner of the front page. I myself glanced at it and recall thinking to myself what a shame it was nobody was vetting a team to challenge our local news rag staff. 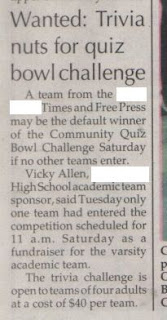 See where this is going? Thought you would.

Last evening I received not one, but two calls from localz that I knew, inquiring whether or not I found trivia bowls of a trivial nature.

I chose to join the first team that called me, since I am associated with them through the non-profit .org on whose board of dir. I sit as a member. My teammates on the buzzer bench in all things trivia will be a local artist/businessman, a state cop, and an attorney.

The match is tomorrow and I'll be gearing up for it by ignoring any and all activity that involves taxing my gray matter and focusing my energy on completing the trim painting in our new upstairs bathroom's walk-in closet.

Nothing like some mindless brush stroking to prepare for the regurgitation of vast quantities of useless knowledge - just about the only kind my mind bothers with of late.

Results of the challenge will be forthcoming...unless I freeze on stage and can't recall even one of the states that borders Michigan, or who was it that's buried in Grant's Tomb.
Posted by OKDad at 1:57 PM No comments:

Footloose for a new generation

We had a few hours to kill between the end of school day and the birthday dinner for my turning-9-year old at my in-laws house down in the city.

I perused the yahoo movie listings and found a G-rated flick which the girls had been wanting to see, playing at the theater close to my in-laws, so off we went.

So now my life's journey had carried me to a darkened theater with my two very own moppets, watching Disney's version of teenage angst in music, dance, and song.

With it's catchy bubble-gum pop tunage and Dancing with the Stars inspired choreography, I confess to spending a great deal of the movie catching my two little girls digging the ride, moving their feet and trying desperately to memorize the song lyrics.

The strangest aspect of the entire evening was my realization that

Degrassi Jr. High this was not.

There was one movie highlight for dear old Dad in this musical of high schoolers and it came, in all places, during a moving and angst driven junkyard dance number. While the two male leads were hopping and bopping around their childhood hang-out, waxing philosophical on the simplicity and innocence of their youth, I spotted a junked '72 El Camino as one of the dance stage props.

It looked in pretty decent shape. Totally restorable. A good project car to be sure.

Wonder what junk yard they shot that scene in?
Posted by OKDad at 5:23 AM 1 comment:

Before XBOX, Wii and PS3 there was...Singer

To quote a line from the famous teen flick, Ferris Bueller's Day off,...

"I asked for a car, I got a computer..."
For my recently turned 9-year old, however, the line would be modified as follows,

"I asked for a Wii, I got a sewing machine..."
A Singer Inspiration to be exact.

She had asked for one awhile ago and has shown periodic interest since our recent stroll through the sewing craft displays at the State Fair of Oklahoma.

The hunt for an age and skill appropriate machine was on, with the ultimate decision being left to the balancing act of bank account vs. gift over-indulgence factor.

She was not going to get a Pfaff, that much we knew, however we wanted a machine that would survive through her initial learning stages yet be full featured enough to carry her into her more productive garment making phases ahead.

The Singer we chose seemed a reasonable, bullet-proof, time tested and quality-proven compromise, the purchase of which also helped me set a precedent for that dreaded day 7 years from now when C asks for her first car ("...a sweet little BMW or Honda S2000 would be nice...") and I come home with a '74 Dodge Monaco with triple-shellacked lumber bumpers, a 10-point roll cage, and a Navy surplus combination ejection seat/quick-deploy parachute.

Hey, I'll paint it whatever color she wants it...with flames even.

Anyhow, after a brief lesson on the operational and safety features of the rapid-fire "machine de la sewing," C took to it like a Kentucky moonshine runner to a V8 Ford and was turning out pillow after pillow for her Webkinz petz in no time. She has since graduated to piecing together a quilt -- of sorts -- made out of material from our scrap material craft bin (what, you don't have a scrap material craft bin?)

Since I wasn't able to take the new machine apart to show C how a sewing machine actually works, the net provided me with the necessary info and then some. Found this graphic on Wiki that shows how a lockstitch is made, which solved a riddle and provided mere minutes of animated pleasure for the girls and I.

I've actually mandated C to learn the machine well enough to give dear old Dad a lesson in the coming days. She seems more than thrilled at the concept of teaching me how to operate a "power tool."

Maybe my days of duct taping the hem up on my Dockers are finally over?
Posted by OKDad at 2:50 PM 3 comments:

Coffee, donuts and draggin' Main with the Father

The other morning on our Friday a.m. weekly donut splurge-fest, we sat in a booth adjacent to a group of elderly gentlemen in their late-60's who were dipping cake donuts and drinking joe with the young priest from the local Catholic church.

The conversation centered on the adventures of youthful splendor growing up in our small town, including country road drag races with their Daddie's Fords, cruising to the smaller towns just up the highway to meet some "townie gals" from a different school, and after-game garage parties that always seem to run out of drinks before they ran out of steam.

Heck, we and everyone else in the fried round dough haven were even treated to a live demonstrations of the "beer bottle dip" practiced by the local 50's greasers whenever Officer Wilson would cruise by the park on a late summer weekend night.

The highlight of the conversation, for me at least, was listening to a few stories of the young 30-something Priest's eventful teenagedom life as he relayed stories of "draggin' Main" with his buddies in a beat up Camaro in the small town where he grew up.

Recently, I heard a report on NPR's "Fresh Air" program centered around Episcopalian minister Barbara Brown Taylor and her new book, Leaving Church: A Memoir of Faith, wherein she describes her decision to leave her job after 15 years as a full-time minister due in part to what she called "compassion fatigue."

Being an ordained and recognized spiritual leader in a small town means you are on stage, on-call 24-7-365, with your compassion and sensitivity on display with every casual conversation you have in line at WalMart, every meal you take at someones house, and every piece of fruit or roll of bathroom tissue you squeeze at the grocery store.

While in a larger "market" men and women of the cloth, pulpit, and collar can more-or-less (depending on the chosen faiths prescribed practices for public appearance attire) make their clandestine way outside of the church grounds completely incognito.

Not so in a small town, where their faces are more or less on par in recognition factor with the POTUS-elect and OU Coach Bob Stoops.

Given that pressure and the awareness that a term such as "compassion fatigue" exists, I hope all of the dedicated male and female spiritual leaders in our small town take few mornings a month to dip a donut or two and let the air out of their proverbial collars.

Wouldn't do to have any of our local religious leaders go postal, or pulpital, as it were.
Posted by OKDad at 6:41 AM No comments:

Just a little pinch will do ya

While I suppose the 3rd graders back in our old San Gabriel Valley neighborhood are receiving pamphlets and informational flyers on "How to identify the weapon in your school mates gym bag," and "What to say and where to look when an Asian gang member approaches you on the street," out here on the central Oklahoma prairie, we recently found this informative brochure in our 3rd graders backpack. 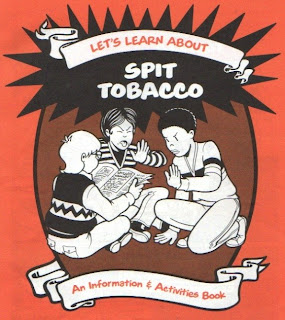 Theorizing how many Dads and Grand Dads associated with C's class of 19 students are into the tobacco chewing habit, I'm thinking this particular brochure didn't find it's way into many family discussions once it made it's way home.

Our family, however, did discuss it, finished some of the word games and activities outlined in the brochure, and generally had a good time making disgusting noises as we mimicked the sputum discharge associated with "t'backy chawing."
Posted by OKDad at 8:55 AM 1 comment:

Things we learned from our first slumber party...Overall the girl's seemed to have a good time, and through tired and sleep deprived eyes, the birthday girl ushered a sincerest of sincere thank-you moments after our last guest had departed.