This police blotter report in a recent issue of my small town's news rag contained a synergistic coupling of ironic and brain tickling hilarity. For your reading (and life lesson learning) pleasure, I present for you my take on the 4th of July police doin's in my small town... 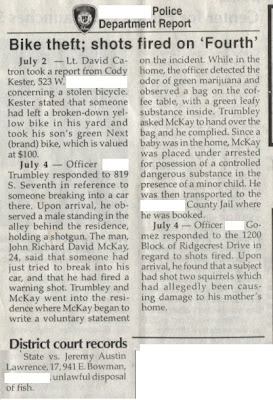 First off, had I written the headline for the first entry, it would have read, "Bike thief, green with envy for yellow bike." Badu-bump.

Next, under lessons learned, I suggest not shooting a firearm in the city limits to scare off would be pickup thieves, until you've cleaned up your doobage and sprayed a good dose of Airwick inside your home.

Finally, apparently in my small town, discharging a firearm in the city limits to kill a couple of destructive squirrels won't get your arrested...but improperly disposing of fish will land you a court date.
Posted by OKDad at 12:01 AM 5 comments:

While it was at first a little strange to see these "dubs" from the past used as yard and garden decor in my small town, much like fried okra, Dr. Pepper and Ford 150's as the family vehicle of choice out here, I've grown accustomed to their presence. 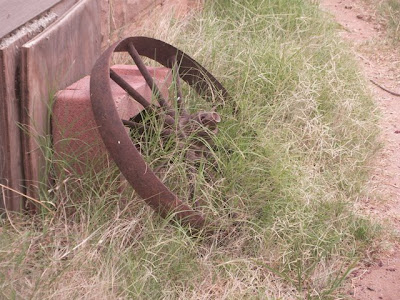 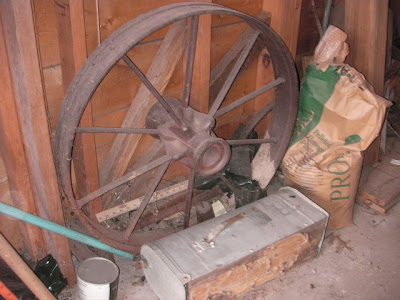 They must be considered by some to be a highly valued asset to a domiciles exterior ambiance -- valuable enough to be stolen in fact... 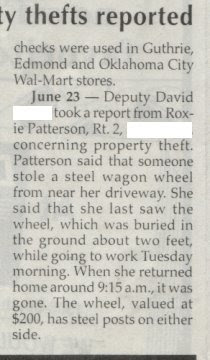 Who knows, perhaps some day my Chevy Ralley wheels and Crager SS rims will adorn (litter) the yard of some future dwelling and be labeled as "vintage" and "retro" by it's owners.
Posted by OKDad at 9:26 AM 1 comment: 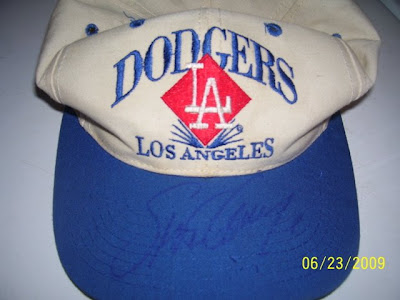 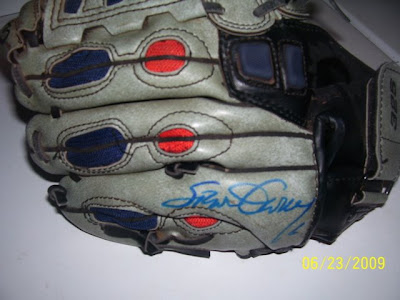 The major joy of the event took place as I stood off to the side watching Jon step up to the table and pull his prized ball into view. While my eyes witnessed the everyday magic of one hero (a retired ballplayer) meeting another (loving husband, dedicated father), I let my mind drift back to my heady days of youth, when hero's stood proudly on pedestals and games were meant to be played, not paid for.
Posted by OKDad at 10:38 AM 2 comments:

Need to keep a tally of food and mercantile that's been rolling into our house since word got around my small town that the "little wife" is hobbling around with a busted ankle.

All I can say is, what a spectacular tradition this is.Big thanks and hoo-haahs to all our lovely friends and neighbors that have participated in the "what's that family going to do for food now that S can't even stand up and walk" parade.

It's a good thing I can warm things up with the best of them.
Posted by OKDad at 7:02 PM 4 comments:

One of the many hoops I had to jump through on my way to my recent hard won acquisition of this... 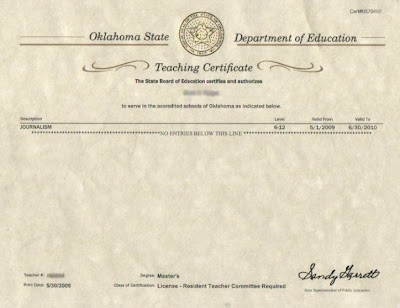 ..was to be electronically fingerprinted at the State Dept. of Education, wherein my identity and background could be checked with the OSBI.

I was more than happy to do so, since it's one of those things that I'm glad they're checking before letting anyone near my publicly schooled kids. On the other hand, it unnerved me some to think that my name was now on yet another government "list."

True, we average citizens have been providing our thumb prints for years to get our driver's license renewed, and I know I'm not the only parent in the world to have their own kid's fingerprints on file with the local law enforcement agency.

However the entire experience of actually being f-printed at the hands of a complete stranger, even if it's for innocent and law-abiding reasons, was slightly more comfortable than the few minutes between the time you realize you need to adjust your shorts, and the instant you get to.

Guys, you know exactly what I mean here.

And what exactly am I going to do with a teaching certificate in Journalism (how all my film and tv education and experience was translated into a license to teach secondary level journalism is beyond me, but there you have it)?

Who knows. But given the number of hoops I jumped through, the number of tests I've taken (still more of these on the horizon), interviews I've succumbed to and paperwork that has passed through my home office, I guess I'd better do something more with it other than hang it on the wall next to my vintage iMac "Yum" poster and collection of American Graffiti die cast cars from the Johnny Lightning collection.
Posted by OKDad at 7:16 AM 5 comments:

Have you seen these fish?

The dog days of summer are hovering on the quickly approaching horizon and already our small town is seeing a rash of theft and thievery. 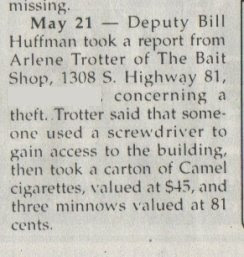 $.81 for three minnows. Seems the bad economy has trickled down to live bait prices as well.

My only question (actually, I have many but this one seemed the most questionable that I could cull from this police blotter entry) is how exactly did the Bait Shop owner know there were only 3 minnows missing? The bait shops that I've visited (okay, I've been to two in my lifetime) had huge tanks full of the swimming silver fishes.

Maybe the Rainman is in charge of the minnow tank.
Posted by OKDad at 10:42 AM 1 comment:

DO NOT make important decisions

Wifey is home and resting now, after today's out-patient procedure to get her "shinbone connected to her ankle bone..." went textbook smooth.

S's ortho cutter was a slightly bulkier and more European version of Jason Scott Lee (in his prime while filming Dragon: The Bruce Lee Story) with all the personality of the 750cfm carburetor on my El Camino. Still, I find that surgeons as a group are a right serious lot and truth be told, when staring down the wrong end of a #2 scalpel, I'd prefer less "Hawkeye" Pierce antics and more Dr. Rocket Romano, if you know what I mean.

Still and all, his prognosis was honest and forthright ("I can't make you good as new, but I'll do my best") and he did manage to crack a smile and mutter the appropriately witty retort when I pulled out the old "Doctor, will she be able to play the violin, when the cast comes off?" joke.

The title for this post was culled from the myriad of printed and verbally espoused directions, instructions, orders, recovery guidelines and mandates we received from an entire staff of concerned nurses, doctors, and assorted medical personnel during the course of our most trying of days.

To bad. I think in the fog of anesthesia, some of the most important decisions can be made with little or no regret at all.
Posted by OKDad at 8:09 PM No comments:

The email snuck into my Inbox sometime during the daylight hours and by the time I had cleaned enough paint chips from my eyes to gaze upon my iBooks' screen, it was close to midnight. 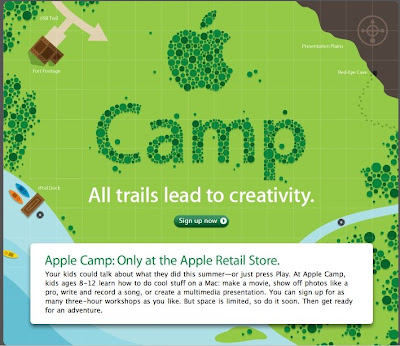 Undaunted, I attempted to log into the registration servers that Apple had set up to handle the anticipated Katrina-like flood of online requests for registration into these free Apple-store/Apple-paid-for/Apple-employee-taught workshops for kidkins.

After the first hour... of refreshing the reg site ad infinitum, I finally made it through and deftly jumped through the several hoops necessary to get C registered in the Moviemaking workshop at the Apple Store near us (there are two in my panhandled state).

But wait, we can sign up for more than one workshop?

The next workshop reg only took 24-minutes of incessant clicking and refreshing to hit the server. By gosh, I got through again and am now the proud recipient of two, count 'em, two emails from my local Apple Store welcoming me and my child (ages 8-12) to the gleaming bright white store offering all things Apple.

At only 6, my youngest is not yet of "free workshop" age (just as well since she has a pretty good handle on iMovie already...Final Cut Pro is not far behind). While I'm moviemaking with C, I expect PK will just find a nice Macbook somewhere in the store and proceed to dazzle the surrounding shoppers with her trackpad prowess..."No sweetie, don't drop into the shell here at the store, that's just for home doings...I know you like practicing your Unix commands but still..."

Of course I'm kidding about that whole OSX shell thing. What do you think I'm raising here, a Unix geek?
Posted by OKDad at 12:05 AM No comments: