S has always had a sore spot for John Steinbeck's portrayal of Okies as "mattress toting hucksters" in his novel, The Grapes of Wrath. While I believe his portrayal of the Joad family to be far from anything negative, I can see how many Oklahoman's may have grown up being sensitive to the issue.

The #1 cause of accidents and death on Oklahoma's highways is due to loose items falling from moving vehicles.

Tools and hay bales from farm trucks, tack and manure from horse trailers, beer cans from drunk teenagers ridiing in the back of their pick-em-up-trucks.

Then there are these people... 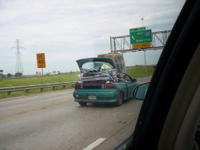 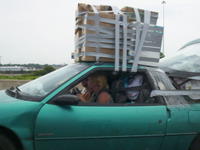 I blame NASCAR for the mental giants who packed this vehicle. They watch Dale Jr's crew hold his beat up Chevy together with Duct Tape to finish a race, and they figure "if it's good enough for Dale Jr's car, it must be good enough for my car and all my worldly belongings."

Darwin Awards being handed out here, on the highways of Oklahoma.

All I could think of was... and if it rains?

I was driving along I-44 in Tulsa a few months ago and two mattresses flew out of a truck in front of me and into my car. I ran over one of the mattresses at approx. 65 MPH. Luckily it didn't damage my car, but it sure was scary.

Anonymous said...
This comment has been removed by a blog administrator.
7:00 PM

Towelie -- if it had been a boxspring, you and your car may have had it.

I once saw a red hot muffler go spinning off of an old Ford on a freeway in LA once and did a bit a fair stunt-type driving to avoid the sucker.

Mattresses would go flying like a NASCAR racer in an updraft.